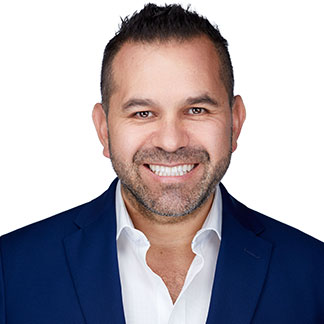 Dr. Abril’s professional promise to you is trust, respect, and ethical care of your teeth, implants and gums. He believes in dedicating the right amount of time to each patient whether it is for a consultation or a complex surgical procedure. Dr. Abril graduated from St. Louis University in St. Louis, Missouri where he received his degree in both periodontics and Master of Science in dentistry (research). During his time as a resident Dr. Abril was a clinical instructor of the Southern Illinois University. His experience goes beyond the classroom and extends to international venues. He practiced privately for two years in Bogotá, Colombia where he holds a degree in general dentistry. He worked in a general dentistry practice in Northern Virginia for five years where he discovered his passion for periodontics and focused patient care.

During his periodontal training, Dr. Abril acquired clinical experience in all aspects of non-surgical and surgical periodontal procedures including scaling and root planing (deep cleanings), bone grafting around teeth and implants, plastic surgery for teeth with gum recession and for teeth with poor gum quality, as well as crown lengthening procedures. He is fully trained in dental implant surgery, a treatment that replaces missing teeth with state-of-the-art dental implants that look and function like natural teeth. He has committed himself to improving the quality of people’s lives by treating the diseases that cause tooth loss and contribute to many overall health problems. He is also LANAP® and LAPIP™ certified which consists of the use of a periodontal laser - PerioLase ®, to conservatively (no incisions, no stitches and better recovery) treat periodontal disease allowing significant improvements in the health of teeth and implants that were considered to have a poor-questionable prognosis in the beginning of the treatment.

Dr. Abril strives to learn new techniques to better serve his patients. He has received intensive surgical training in different countries including: United States, Colombia, Mexico and Hungary. He keeps his active status as a Diplomate of the American Board of Periodontology. He is also a member of the American Academy of Periodontology and the Academy of Osseointegration.

Originally from Bogotá, Colombia, Dr. Abril lives in Aldie, Virginia with his wife Paola and his daughter Sarah. Dr. Abril is fluent in English and Spanish.